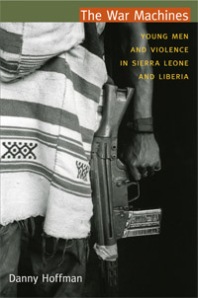 Below is my review of Danny Hoffman’s fantastic book The War Machines: young men and violence in Sierra Leone and Liberia recently published by Duke University Press.

Malaria in insecure spaces. The first time I heard of Danny Hoffman was at an international conference and it was a fantastic story. Some of the senior academics shook their heads at the risks he had taken, blaming it on his “youth”, but I was rather impressed. My reading was that surviving this situation was dependent on his skillful building of trust and mutual respect with his research subjects: rebel soldiers. Hoffman had caught a serious stroke of malaria whilst being in the deep Sierra Leonean bush with rebel soldiers. He was saved by rebels who carried him across the border to Liberia for medical attention; clearly risking their lives, but thereby saving his.

Respect and research. Sierra Leoneans have quite clear ideas of the “white man”, many are bad; afraid of local people, greedy and arrogant. These qualities are awarded the average UN/INGO-worker, businessman and researcher. Without doubt no Sierra Leonean would risk their life for him/her. There are a few others who escape the bad “white man” category. You hear of them in the streets of Freetown and beyond. Researchers in post-war are many, but surprisingly few are talked of as “good”. Meeting people in the streets of Freetown in post-Hoffman time I can say for certain that he is part of the good ones. As researchers fieldworking sensitive issues knows, mutual respect and trust is absolutely crucial for the outcome – if not we end up doing science on a spectra ranging from semi-truths to outright lies.

Previous reads. It has always inspired me to read Danny Hoffman. He writes exceptionally well. Another advantage of Hoffman is that his texts are extremely varied; he is far from rewriting the same paper time and again. Thematically he has guided us from rational choice perspectives of the Sierra Leone war (Hoffman 2004) to interesting theoretical developments of the Agambean camp (Hoffman 2007) – see also chapter 5 in this book. In the current book Hoffman is taking on yet another challenge.

Hoffman’s Plateaus. This book is principally about “war as a violent mode of participating in today’s global economy” (p. 122) based on an ethnographic material from the Mano River War (primarily Sierra Leone, and to some extent the interrelated conflict in Liberia), but it is also a reading of Deleuze and Guattari’s Capitalism and Schizophrenia (Anti-Oedipus (1983) and A thousand plateaus (1987)) and as such an important theoretical contribution with implications far beyond the Mano River warscape. Although there are many theoretically stimulating parts of the book, the by far most inspiring is how Hoffman consistently uses the work of Deleuze and Guattari as overarching framework; especially the war machine concept. Indeed by doing so he at times bends his ethnography slightly too much, yet still it is great with an anthropologist going beyond eclectic picking pieces of philosophical theory.

Jealousy and praise. I have myself researched the wars in the Mano River region since 1996, starting out in a refugee camp in Côte d’Ivoire, followed by a year fieldwork in Liberia and subsequently two years in Freetown, Sierra Leone. Throughout this time I have focused on young people’s experiences of war and its aftermath. Most of Hoffman’s conclusions fit well with mine. I am slightly jealous: I would have liked to be the author of this fine book. Reading Hoffman I am very much impressed by his close knowledge of the Sierra Leonean Kamajors, both concerning their activities in Sierra Leone and later in Liberia. With a focus on the advent and gradual metamorphosis of the Kamajors, following a plateau-like logic of the Deleuzian and Guattarian war machine this is the most well-informed research on this particular group up to date. But it is going far beyond just an ethnographic study of the Kamajors, and for readers not interested in particularities of Sierra Leone and its war Hoffman offers a rich reading especially of marginal young people’s life predicaments in war zones and structural outcomes of their participation in the war machines that promise theoretical influence and inspiration far beyond Sierra Leone and African warzones.

A teaspoon of critique. Hoffman points out how the wars in Liberia and Sierra Leone (and to some extent also the conflict in Côte d’Ivoire and the unrest in Guinea) have been so entangled that it does not make sense to analyze or discuss them apart, I agree with that and like the way that he initially portrays the Mano River War. However if he promises a broader and more inclusive reading of the wars, the outcome is questionable. First the book is insignificantly about the Liberian part of the war and secondly due to the focus on the Kamajors in the south of Sierra Leone it is also a rather compartmentalized reading of the war in Sierra Leone. Does it make sense to analyze the Kamajors without a tangible RUF, or even the Kamajors without a broader understanding of other hunting militias within the Civil Defence Force (CDF) umbrella? It is not to say that Hoffman is not doing this at all, but it is questionable to say that the book is about the Mano River War. It analyses the Kamajors in the Mano River War. In part the focus on a Kamajor war machine obfuscates a larger reading of political events in Sierra Leone. Hoffman brilliantly shows the political game around the Kamajors, but curtail the same connections and ties for other military players such as RUF, NPRC, AFRC and other actors withon the CDF. In Hoffman’s analysis Kamajor fighters of Southern Sierra Leone are depicted as more victims of circumstances than other militant groups in the country’s civil war; they are described as more human and less part of the hardcore necropolitics of the Mano River War; they are portrayed as less destructive than other military actors. This may indeed be a correct observation, but reserving this special status for them, putting them apart from others makes the motives of other movements such as the RUF unintelligible. If CDF, with Kamajors in particular, is seen as compartmentalized, fragmented and individualized, highly dependent on local factors and leadership, RUF and others are discussed as monolithic. But did not RUF also have its plateaus? Hoffman would certainly answer yes to this question, but it slightly worries me how the book gives the impression that Kamajors exists on a different plateau than the other movements. Below I will pick up some few points among many, which are especially pertinent in Hoffman’s book.

Youth as those not in power. Hoffman follows up Richards’, Abdullah’s and many others influential work on marginalized youth in the Mano River War. He particularly focuses on their violent capacities in rural Sierra Leone, and subsequently in Freetown and in the Liberian capital Monrovia. Here he is taking us well-beyond shallow ideas of idleness and loitering and in fact showing how urban localities function as loci for picking up laborers, both with capacity for violence and not. The city is a form of barracks as he concludes in chapter five. Young men are a kind of population flotante, he observes, borrowing from Janet Roitman and Filip de Boeck, with the “ability to quickly cross the divide between city and bush, and to profit from their mobility between spheres” (p. 188). Chapter six is particularly interesting as he in detail describes the lives in the barracks of what he calls the Hotel Kamajor, an old disused hotel in central Freetown. In this chapter we also see some of the best examples of Hoffman’s ability to capture and describe details.

On production. With Hotel Kamajor and other urban barracks Hoffman adds importantly to our understanding of the production of violence. He describes how violence is not just a strategy, but ought to be seen as a commodity in its own right. Hoffman writes that “[p]roduction without limits is how Deleuze and Guattari characterize the process of production under the real subsumption of labor, and nowhere is it more clearly evident than in the warscape of the West African postcolony” (p. 107). Violence in his reading is entering informal networks based on circulation and exchange and “[a]ccording to capital’s logic of surplus production it becomes interchangeable with diamonds and cash, its values translated into political subjectivity and masculine identity.” (p. 107-108). As I write this I am in Monrovia, observing how the presidential elections unfolds and albeit the country has been spared from electoral violence so far it is clear that also in the postwar the trade of violence as a product is an intricate part of the political game, as parties are buying up networks of former combatants and others embodying violent potentialities centered around ex-generals of the old military factions in so called Battle Cry organizations. It is far more sublime here than in the 2007 general elections in Sierra Leone where the three main parties directly remobilized informal task forces from the three main military factions (Christensen and Utas 2008), but violence it should be observed is also in the post-war traded as a political and economic commodity.

Violent moments. Returning to the warscape Hoffman notes that “young men’s ability to exchange violence (including withholding it) had become key to their participation as subjects in the new postmodern West African landscape” (p. 109) and that for people “[j]oining the CDF and putting one’s body and its capacity for violence into circulation as a tradeable commodity had become the grounds for economic, political, and social being” (p. 112) It was “an emergent form of participation in the global economy” (ibid). Hoffman is doing a very good job connecting the Mano River Wars to global political, economic processes and its forms of governance. Maybe one could be critical to the idea of the war as an emergent form conditioned by postcoloniality and postmodernity only. I would suggest that violent entrepreneurialism rather rests on a long colonial history, and partly (but certainly not solely) linked to pre-colonial structures (see e.g. Argenti 2007). Certainly war was a remodeling and enhancement of social relations under quite extraordinary conditions, but would it not rest on longstanding social logics? I believe that a longer historical gaze would have given a more comprehensive analysis (see e.g. Utas 2009).

Looting as redistribution. Here is yet another point I like, Hoffman takes a fresh gaze on wartime looting. He states that looting “was simply a more efficient mode of distribution than the corrupt and bloated United Nations bureaucracy” (p 109) reiterating a point made by Roitman: “violent appropriation is a modality not only of social mobility but also of social welfare” (ibid). A rather typical standpoint we take is that wartime looting is benefitting only a very limited group of combatants, but if we look into the flows of goods and cash in the Mano River War we see how it frequently found its way to families, regions etc. which had been previously marginalized. Indeed with the logic of war machine even these processes change over time and as flows and alternative production, just as the movement itself, is captured by the establishment the initial redistributive effort is largely quelled and flows redirected to old centra.

Final notes. This is an exceptional read for audience well-beyond war and conflict interested anthropologists. Hoffman has an apt eye, is analytically sass and writes in straightforward prose. The book is richly illustrated with Hoffman’s excellent photos. For those who are particularly interested in Sierra Leone Civil War this book combined with Krijn Peters recently published War and the crisis of youth in Sierra Leone on RUF gives a broader reading of the war, and combined with Chris Coulter’s Bushwives and Girl soldiers (2009) it also functions as a excellent reading of militarized gender in the conflict.

Argenti, N. (2007). The intestines of the state : youth, violence, and belated histories in the Cameroon grassfields. Chicago, University of Chicago Press.